What Is Periodontal Disease?

"Perio" means around, and "dontal" refers to teeth. Periodontal diseases are infections of the structures around the teeth, which include the gums, periodontal ligament and alveolar bone. In the earliest stage of periodontal disease — gingivitis — the infection affects the gums. In more severe forms of the disease, all of the tissues are involved. 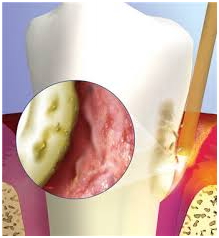 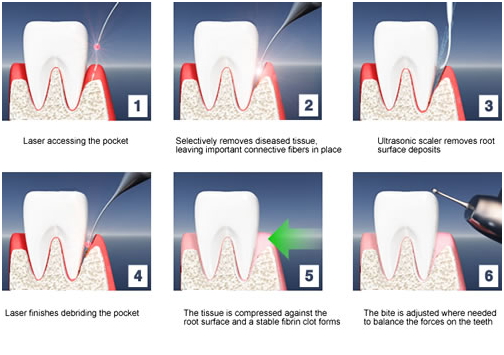 Virtually Painless, More Natural Dentistry*
• Heat, vibration and pressure are the primary causes of pain associated with the use of the traditional dental drill. Since cutting both hard and soft tissues (teeth and gums) with the WaterLase does not generate heat, vibration or pressure, many dental procedures can be performed nearly pain-free with fewer shots, less need for anesthesia, less use of the drill and fewer numb lips! Additionally, using the WaterLase for gum procedures reduces bleeding, post-operative pain, swelling and the need for pain medication in many cases. It’s just a better way to get your dentistry done!

Accuracy & Precision
• WaterLase dentists are able to remove tooth enamel decay (the hardest substance in the body), bone and gum tissue precisely while leaving surrounding areas unaffected. This conserves more of the precious tooth structure you were born with, helping you to maintain your natural teeth longer!

Reduced Trauma
• High speed drills can cause hairline cracks and fractures in the teeth that eventually lead to future dental problems. WaterLase reduces damage to healthy portions of the tooth and minimizes trauma.

Less Bleeding & Swelling
• Due to its conservative cutting action, the WaterLase performs many soft tissue (gum) procedures with little or no bleeding and less post-op swelling.

Fewer Dental Visits
• Since you often do not need shots or anesthesia, a WaterLase dentist can perform cavity preps in all areas of the mouth in just one visit. This technology also gives trained WaterLase dentists the ability to perform many procedures that were previously referred to specialists, saving you time and hassle as you address the dental needs of you and your family.

• The WaterLase is extremely versatile. It can be used for a wide range of hard and soft tissue procedures. From decay removal, cavity preparation, root canals, smile design, gum and bone surgical procedures and many others. Let your WaterLase dentist be a one stop shop for you!